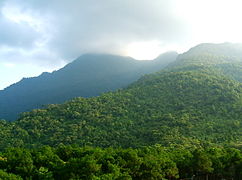 Destination: Ba Vi National Park
You want to see the countryside of Vietnam? You love the outdoors and nature? You love trekking? This tour is for you. Ba Vi National Park is centered on Mount Ba Vi - an isolated soil-limestone mountain situated about 65 km west from Hanoi. The park has several rare and endangered plants in its protected forest, and its mamnals include two species of rare 'flying' squirrel. Human encroachment on the area has made the chances of seeing any of these pretty rare. There's an orchid garden and a bird garden, and hiking opportunities through the forested slopes of the mountain. There's a temple to Uncle Ho at the mountain's summit (1276m) - it's a hard but beautiful 30-minute climb up 1229 steps through the forest - with spectacular views of the Red River valley and Hanoi in the distance. To Ba Vi National Park we not only enjoy the fresh air of tropical forests and subtropical low mountain, but also enjoy many spectacular natural scenery, interesting.
01 Day - Explore another world at Bavi National park! 1

- 8:00 AM Pick up from your hotel in Hanoi.
- 09:30 AM Arriving Bavi national park.
On the way up the hill, we can view the surrounding landscape. Firstly, We will walk up to the summit of Mt. King where we visit to the temple of Ho Chi Minh. It take about 45 minutes to 01 hour of slow but steady ascent we stop at the 1, 100m altitude.
- 12:00 AM Having a lunch at local restaurant.
- 1:00 PM Visit Tan Vien , a shrine to Saint Tan Vien, one of the immortals in the mythology of the Vietnamese people of yore.
We will reach the peak at 1, 227m, where the Tan Vien shrine was built in the 11th century in honour of a legendary hero who had helped Vietnamese in their hard struggle against the super natural.
- 3:30 PM Back to Hanoi. End of our service

What's Included:
- Transportation is included all day from the agreed pick-up point and drop point with air-condition vehicle.
- Entrance fees.
- Guided services to all areas and attractions.
- Lunch at local restaurant

What's Extra:
- Personal expenses
- Other meals and drinks
- Insurance
- All other services not made on the written form

Ba Vi National Park
Travelling 50 km from the central city to the west of Ha Noi city, visitor will have chance to visit Ba Vi national park. The park is centreled on mount Ba Vi. The mountain rises steeply out of a plain that rarely exceeds 30 m in elevation. Generally, slopes on the western side of Ba Vi mountain, at an average of 25°, are steeper than those on the east. Above 400 m, the slopes on the western side may reach a gradient of 35° and rocky cliffs are present. Ba Vi National Park is located about 50km west from Hanoi. It is one of the attractions near the centre of Vietnam and includes national beautiful natural sightseeing and various vegetations. Coming to Ba Vi National Park, you can enjoy nature in fully.

Mount Ba Vi has three peaks: the highest is Dinh Vua at 1,296 m, followed by Tan Vien at 1,226 m and Ngoc Hoa at 1,120 m. Because of the mountainous topography, the climate at Ba Vi varies with altitude. Above 500 m, fog enshrouds the top of the mountain on most days. Ba Vi has a large river only, it is Da river on the western side of the national park. Streams in the international park are small and fast flowing. In rainy season, the volume of water flowing through these small watercourses and over the surface of the ground is sometimes sufficient to cause landslides. In the dry season, however, many of the streams are dry.

The natural forest at Ba Vi is mainly distributed at elevation above 600m. Most of them are evergreen forest, lower montane evergreen forest and lower montane mixed coniferous and broadleaf forest. Ba Vi has 812 species of vascular plant, several species were described for the first time from the site, for example Ixora balansae, Litsea baviensis and Lasianthus langkokensis.  Also according to the investment plan, Ba Vi supports 44 mammal species, 114 bird species, 15 reptile species and nine amphibian species.

Ba Vi national Park is situated around a three-peaked mountains of Dinh Vua which is the highest at 1,296m, Tan Vien which is 1,226m and Ngoc Hoa the smallest at 1,131m. Ba Vi National Park totally includes 63 species of mammals and 1,209 species of plants, 21 of them are rare plant species listed in the Vietnam Red Book such as Bach xanh, Sen mat, Phi ba mui, De tung soc trang, Hoa tien, etc. Because of various plants, the park is called as the lung of Hanoi’s capital.

Ba Vi national park brings a lot of advantages for people here. For instance, medicinal plant collection is a major economic activity in the area. It is also an important source of income for local people, especial Dao people. While French was here on colonial period, they used to make Ba Vi become a station, they also built about 200 villas. In addition, a road was built up the mountain to an elevation of 1,100 m. With the convenience of geographical location, favourable climate, and good infrastructure Ba Vi becomes more attractive to tourist. Ba Vi National Park is also an important site for education and scientific research. Further major tourism resorts are planned in and around the national park.

What to see and to do
Way to the peak of Ba Vi National Park is very smoothly but flexuous a little. On that way, visitors can stop for a while to see a deserted ancient church. Here, visitors tend to take some picture and even many couples also go there to take wedding photos. The higher you reach, the purer air is. Visitors will admire panorama view of imposing mountains, which are covered by green of plants, loom dimly in the veil of clouds. It is a great time when you stand among beautiful nature, try closing your eyes for a minute, take a deep breath and listen to lovely sound of flowing streams, birds’ twitter and unique smell of soil mixed trees.

Visitors can hike to the summit of the Tan Vien peak, in which there is a Mountain God shrine. Besides, you also can pass 1.300 stone steps to reach the peak of Dinh Vua Mountain, where Ho Chi Minh shrine and Bao Thien tower placed.

Book this trip    Customize this trip