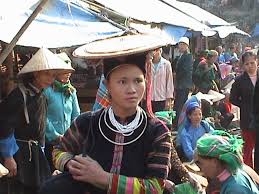 Ba Be Lakes National Park is a remote region far to the north of Hanoi, reached by a long but scenic drive from Hanoi.

Along the route there are plenty of opportunities to break the journey, to stretch limbs and take photos of the picturesque mountainous scenery and local minority villages. The National Park is a beautiful area best explored by boat and on foot, drifting downstream to the vast Puong Cave and exploring the local village markets nearby and the cascading waterfalls at Dau Dang. Accommodation in this part of Vietnam is basic, staying in traditional stilt-house homestays, often in communal style, but for those who don't mind a little bit of local character this is a glorious and still relatively undeveloped part of Vietnam.

Ba Be Lake
Located 250 km away from Hanoi and 70 km away from Bac Kan’s center, Ba Be National Park belongs to Ba Be district in Bac Kan province. This is a precious natural heritage of Vietnam, a complete and complicated system of primitive forest on stone mountains which are surrounded by tranquil lakes. The national park covers a total area of 23.240 ha which houses 417 types of plant and 299 types of animal. There are a plenty of precious and endangered species that inhabit in this region.

What to see and do
Visitors who come to Ba Be not only enjoy the charisma of nature but also get to know many traditional and scientific values of this natural park through the helpful and energetic tour guides. In sunny days, the scenery resembles a Feng Shui painting that mesmerizes even the most demanding visitors. The surface of the lake is flat; it transforms the whole lake into a mirror that reflects the figures of the majestic mountains and the shining cloud.

Romantically, the young Tay girls in black outfits stand on different boats, helping travellers to cross the picturesque Ba Be Lake.Without a doubt, they are the knowledgeable amateur tour guides who continuously surprise you in your journey to explore this beautiful land. You will be also amazed to learn about the lives of the ethnic groups: their culture, their routine life, their myths, their traditions, etc. People are extremely hospitable in Ba Be so you can even have a chance to visit their house and experience for yourself the breath of Ba Be’s mountains and forests. The park is a complex including lakes, rivers, streams, forests, and caves. Mother Nature loves it too much that she decides to give Ba Be a warm weather in winter and a cool weather in summer so that it can become an ideal destination for people from everywhere to come, admire and cherish in just any season.

ATK Bac Kan
Constructed during the revolution against the French, ATK is a complex of underground tunnels and rooms emboldened by a missile defense system in Cho Don (Bac Kan).

Location and History
"An Toan Khu", meaning "safe zone" - Constructed during the revolution against the French, ATK is a complex of underground tunnels and rooms emboldened by a missile defense system in Cho Don (Bac Kan). This unique and invincible complex was one of the most important venues of the Vietnam Army from 1946 to 1954, where President Ho Chi Minh and many other leaders gathered, discussed and made vital decision involving the destiny of the nation.

A Historical Witness
In the long and unending war against the French’s colonization, Cho Don was chosen to be the Safe Zone of the revolution. Since then, this land had welcomed and protected many Central Departments, as well as the most influential leaders of the Communist Party of Vietnam. In the time between 1947 and 1952, almost all of the Central Departments   had their headquarters in Cho Don. As a result, the underground tunnels were built in order to protect the prominent leaders and officers. Deep down under the ground, a whole complicated system of paths, tunnels, rooms were created. The whole construction was covered with a defense system that is able to withstand bombs and bullets of the enemy. Coming to ATK in particular and Cho Don in general, tourists can not only visit many historical sites but also learn more about the lives of the local inhabitants, discovering their most beautiful cultural essences which can only be found there.

Pac Ngoi Village
This village has more than 40 traditional stilt houses locating on the slope of mountains which surround Ba Be Lake, emphasizing the beauty of this famous ecotourism destination. The village belongs to municipality of Bac Kan province. Surprisingly, while the traditional stilt houses have almost been eradicated in many other provinces, the antique, unique and original houses of ethnic groups are still highly valued and preserved in Pac Ngoi despite the presence of modern architecture.

Historical and Cultural Importance
According to the local government, it is not the lack of money that keeps the inhabitants from building new and convenient houses but the love for their ethnic heritage. They strive to preserve and protect those cultural values from disappearing forever, because without these beautiful stilt houses, Pac Ngoi Village is no longer Pac Ngoi village.

Visitors coming to Pac Ngoi are not only entitled to witness with their naked eyes the most wonderful scenery of Northern Vietnam: a plethora of austere yet interesting stilt houses blending themselves with the glimmering mist and the shinning Ba Be Lakes, but also to stay in the rhythm of the Tay culture.

This claim can be easily proven by the fact that visitors have to remove their shoes once they step the very first steps on the staircase of a stilt house. Inside the house, ethnic people gather around the gleaming fireplace, forgetting themselves in the sophisticate stories about the economy or the politic. They create a world that shares nothing in common with the big cities where electronic lights and high buildings are ubiquitous. They are just there, in their beautiful social center, waiting to share their most interesting stories about life with you.